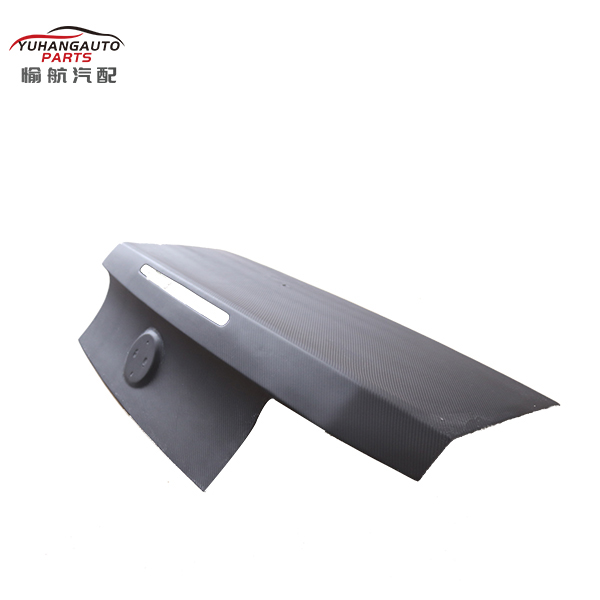 We usually add trunk spoiler to the car modification, but the selection and installation of trunk spoiler is talked about. Now let's talk about the modification of trunk spoiler. From the structure, it can be divided into three types: semi-taillight, full-taillight and no-taillight. The taillight consists of a row of small bulbs built into the taillight, which is connected by a wire and the brake circuit. When the brake pedal is depressed, the taillight will start synchronously with the body taillight, similar to the function of the high brake lamp. Full taillight is even more eye-catching. Four wires are stretched out inside and connected to the brake lamp, small lamp and steering lamp circuit. There are turning lights on both sides, small lights in the middle, and brake lights have their own position, and the turning lights will flash through the relay control on the car, just like the turning lights on the car body. No taillights are single components without taillights.

There are four kinds of tail fins made of aluminium, plastic, Gowing carbon fiber and FRP. Carbon fibre tail fin can reduce fuel consumption and wind resistance more effectively. It is the most popular style now. It has two layers and can adjust concave and convex. Its texture is light and tough. It also makes the original flat body more angry. The tail wing is mostly made in Taiwan, China. It is precise in workmanship and exquisite in painting. There are also tail-wing products produced in Zhejiang, Guangdong and other places, mostly plastic production, surface painting, non-metallic luster, but also relatively dim. Sometimes the tail fin can be distinguished from its workmanship and paint color. It can be divided into clamp fixing and bolt fixing. Fixed clamp is rarely seen in China. The tail wing is clamped on the cover of the reserve compartment with a special clamp, which has the advantage of easy disassembly. The bolts are fixed by drilling holes in the reserve box and then connecting with bolts. This method has the problem of leaking rain, and it can not be easily disassembled, otherwise it will leave ugly boreholes. It can be divided into black and gray without paint, and also has been sprayed with various paints. Black is suitable for cars of different colors. Because electronic technology has been used to control and adjust the paint, so it can be integrated with the body, no difference can be seen, it can be directly installed. Grey can be sprayed with your favorite colours according to your needs. This method is not very common and is only used for car paints with special colours.

How do we choose the tail of a car? Most of the tails are made of fiberglass reinforced plastics (also called fiberglass) or carbon fibers. They are light and tough, and their shape and size are determined by the precise calculation of the designer. They should not be too large or too small, otherwise they will increase the driving resistance of the car or play an undesirable role. 。 The shape of the tail fin can be divided into exaggeration and Wan transition. The former is higher and wider, while the latter is lower and narrower. Generally, the front and rear wings are installed on the car. It can greatly improve the stability and cornering speed of the car, but it is also one of the sources of the air resistance of the car itself, affecting the speed limit of the car. The aerodynamic rules of the 2004 season of Formula One clearly stipulate that the rear wing of a racing car is limited to two (originally three). The reason for this change is that the reduction of the rear wing will reduce the car's downward pressure by 3%-4%. The selection of tail fins varies from car to car. Generally, it is advisable to choose the accessories supplied by car manufacturers and matched with the models. For example, the two-compartment Fukang vertical half-taillight and Santana 2000 full-taillight taillights are supplied by the original factory and play the best role. We can only use other brands without original parts. Of course, if the device passes through, you can choose your favorite rear wing type decorative car is also a good choice.